Feminism and How Women Are Seen in The Greek World
​When it comes to women, they are seen differently. They do not have the same equality that men do and whenever they are in power they are looked down upon. Looking back in history, women are treated unfairly and they are looked at to only have one main job. Feminism is a theme that is covered largely throughout the novels.
​As previously stated, gender norms is something that has come a long way up until today's world. Although it has slowly gotten better, gender norms are still something that we cannot escape. What makes it even more crazy to me is that this is also seen throughout greek mythology. After reading multiple novels throughout the semester, something that stuck out to me the most was the theme of feminism and how power is seen as something that women should not have. In greek mythology, women are viewed differently and they are seen as something that should not be put in charge but rather meet the basic requirements.
Some important women in Greek mythology that I think were outstanding were Clytemnestra, Cassandra, Circe, and Penelope. These four women along with multiple others in Greek mythology held an important role whether it was by having some power, being a responsible mother, or even being very intelligent and looking out for the wellbeing of themselves.
Clytemnestra
Even though Clytemnestra murdered her husband, and it was not okay, she did some great things. She held power and ruled over her own palace Argos which says a lot. Seeing a woman in power back in time was not normal and it was something people hated to witness because they felt like women did not belong in power. Additionally, she was a very strong and independent woman. Her confidence was high which is another reason why many Greek gods did not like her. Apart from being confident she was disliked because she was in power, and it did not portray her as a feminine person.

​
Clytemnestra In Power
Cassandra
In my opinion, Cassandra is an important person because she tried to raise awareness for women and that although they are woman, they can still make change and they can be heard. To me, Cassandra tried to make an impact towards women by letting them know that they can be heard and that it is okay to speak up about your own beliefs. Like in the book, rape is talked about heavily and it is important to bring that up because even years later, it still happens in the world today.
​
Cassandra History
Circe
The third person that I think is important is Circe because she as a woman shows that she is capable of anything and does not need the help of anyone. If she really needs to she will get through all situations herself and does not need to rely on anyone. She is a witch of her own island and that says a lot because there we see again, a female in charge of their own place and doing what they feel like. Circe goes through many hardships in her life and even though they affect her, she did not allow those difficult times to determine her future and what will become. She shows a lot of self-love and confidence which is what I really enjoy seeing.

Penelope
The reason I liked the character Penelope is because we do not get much of an insight on her until we read the book that was about her and her perspective. In previous novels we only got brief ideas about her but could not tell what she was really like as a person. After reading the Penelopiad, we as readers see that she is a very faithful person because she comes across someone who tells her to do the opposite. Penelope stays true to her word, and you also have some empathy towards her because some of the things she goes through is sad.
​
​
Back to the topic of how women are portrayed as in Greek mythology, some women are seen as nothing more than troublesome and only helpful for giving birth. In contrast, men are seen as the complete opposite, they are heroic and strong people. According to an article, women had very little rights. Unlike men, women were not allowed to vote, own their own land. A woman’s job was to be at home and her purpose was to guide children and take care of them. Although there were some restrictions like these, this was not the case all the time. Some women were allowed to own land or even rule land, they were just looked down upon or judged. Just like everything there is a good and a bad to the theme of feminism. Personally, I think women are heroes of their own. Some played a significant role in Greek mythology and without them there would not be some stories or powers there are.
After doing some research, I saw that Athena, Demeter, and Aphrodite are important figures that were worshipped. They were figures that could not be looked down upon because of the way they held themselves together. Athena was a goddess of wisdom and the patron of Athens. One of the reasons that we was worshipped was because she lead soldiers into battle.
Aside from that, there are gender norms that are heavily emphasized. For example, female babies are more prone to being abandoned at birth than male offspring. Hence, what happened to Circe and how her family showed her that she was not favored. Something that was emphasized greatly was the things young girls should be involved in or doing at their young age to grow into the idea of a perfect woman. Activities like dancing, gymnastics, or even music was pointed out for girls. Education was also seen as something to prepare a girl for the role she would fulfill in the future of becoming a mother and rearing a family.

Marriages
Some expectations that women had though was to marry but as a virgin. Marriages were typically arranged by the father or a male figure within the family. Further in their life as stated, they were to be a role model to the children. If help was needed within the household the female would be acquired to do it. Being a married woman though did not mean there was no freedom, they could still attend events like religious ceremonies, festivals and even visit friends. The one thing they were restricted from was public assemblies and voting.
When women were married, they were expected to be faithful. Like anyone else, men should be expected to do the same but that was not the case. Men were allowed to engage with prostitutes or have any other affairs with a woman. If women did such a thing and the husband found out, they would be in serious consequences.

Real History
Tying the theme of feminism and history together, we have come a long way. Although there is much more room for progression, life is way different now compared to how it was over sixty years ago. Women’s rights and being able to vote and have a say in what they felt can finally be done. So much hard work was done so there could be equality. In today’s world you do not really see anything that discriminates against men and women. Although there are still some possibilities of it to happen, it is not seen like the way it was before. There were many important people in history that did so much to get us to where we are now. It is important to acknowledge that because if it weren’t for them, there would be so much unjust and unfair things women would still face. Something that still seems to be sexist is how woman are portrayed and their role. It does not always have to be the woman doing the easier jobs or raising the kids. There should be more awareness raised to this and normalize that it is okay to do the opposite of what is expected. 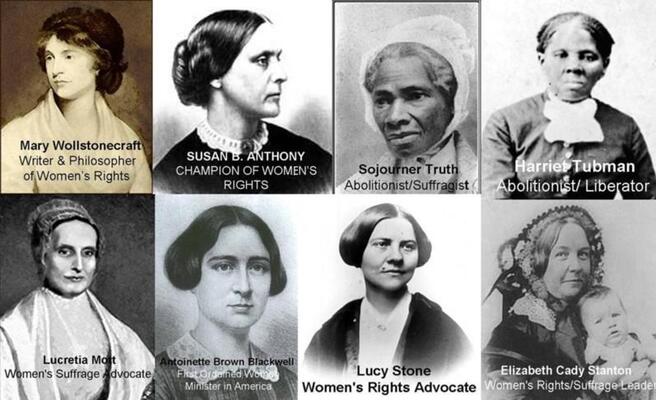 Some important women that played a big part in history.
Here are a few songs that show woman being powerful and confident
Resources:
https://www.worldhistory.org/article/927/women-in-ancient-greece/
https://rampages.us/okayyoo/2016/10/18/women-in-greek-mythology/
https://armstronghistoryjournal.wordpress.com/2017/11/16/containing-the-kalon-kakon-the-portrayal-of-women-in-ancient-greek-mythology/
https://www.history.com/topics/womens-history/womens-history-us-timeline
​